Quite literally some think a 21st Century civil war has erupted on the American political scene as Democrats bask in the awards season while having won a few elections.

While the Grammy weekend kept blue state entertainment millionaires busy, a wealthy, well-organized group of 550 Neoliberal militants led by the Koch family again met Indian Wells, California as they do every year. Consider who the Progressives are up against as reported in the press:


“This midterm is going to be hard,” said Gail Werner-Robertson. “We need everybody to help. We can’t lose the progress that you all have fought so hard for. So I would tell everybody to get ready to fight. Get ready to double down.”
Turning to billionaire industrialist Charles Koch, she quipped: “I’m happily helping my dad spend my inheritance and moving much of it your direction.”
Werner-Robertson is one of 550 members of the Koch network who have come to a resort outside Palm Springs for a three-day seminar, each of whom commits to contribute at least $100,000-per-year to Koch-linked groups. This is their biggest gathering since the Koch brothers began convening like-minded donors twice annually in 2003.

On our website page Wealthy Neoliberals Matter: How an Economic Ideology Took Control of U.S. State and National Legislative Agendas the history, organization, and success of the Neoliberal movement in the United States is reviewed. Last weekend, confronted with several Democratic candidates winning special elections in the past few months, more Neoliberal millionaires gathered than ever before. 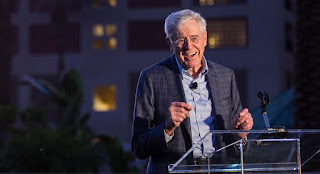 American Neoliberal Charles Koch gives opening
remarks at the Koch's semiannual retreat in Indian
Wells, Calif. on Jan. 27. | Seminar Network
Unlike in the British press over the past two decades, the American press appears to have finally figured out there are Neoliberals, albeit they seem to think they need to identify them in newspaper articles with a celebrity name, the Koch Brothers:
It's clear the Neoliberals intend to spend a much larger than normal sum of money on the 2018 midterm elections. And the Neoliberals intend to have Republican candidates undermine the Democrats on key issues such as immigration:


The network associated with conservative billionaires Charles and David Koch is calling on Congress and the White House to compromise on an immigration deal that provides a permanent legal status for 1.8 million undocumented young adults known as Dreamers, while also enhancing border security.
"We welcome a debate about whether our current legal immigration policy properly balances family and skills-based migration," Daniel Garza, president of the LIBRE Initiative, said in a statement. "But that broad debate should not distract from the immediate goal of providing certainty to Dreamers and enhancing security."
"We look forward to working with Congress and the White House on balanced legislation that enhances border security, protects the Dreamers, and wins bipartisan support," he said.

What you have to understand is that the Neoliberal's aren't particularly conservative beyond economic issues. Here's how the LIBRE Initiative describes itself:


The LIBRE Initiative® is a non-partisan, non-profit grassroots organization that advances the principles and values of economic freedom to empower the U.S. Hispanic community so it can thrive and contribute to a more prosperous America.

Who could be against that?

And the Neoliberals are backing a real prison reform effort while "downplaying the challenge Attorney General Jeff Sessions might pose to their objectives on criminal justice reform, which the network said would be a key policy focus this year [instead of] a broader criminal justice reform proposal that some lawmakers and the Koch network have championed."

As explained on our web page, the Neoliberals have no right-wing social policy agenda. Their sole government policy concern is the relationship between government and the economy.

At any point in time, to win they can easily advocate for liberal causes except anything resembling socialism or restricting business activity. In fact, they don't like government doing more than the minimum necessary to protect property. Looser immigration policy? Why not as it expands the labor pool. The same thing could be said for reversing the Clinton Administration policies that created prison overpopulation.

As of this moment, there is no Progressive billionaire rounding up his 550 rich Progressive friends for a meeting twice a year and having them fund multiple Progressive policy advocacy organizations in every state to gain control of government. There certainly hasn't been such activity since 2003 or 1947.

This year the Neoliberal goal will be to minimize the loss of Republican members in state legislatures and Congress. Then they will plan for expansion of their control in 2020 while putting their economic policy goals into place state-by-state.

Democrats will still be laughing at a comedy bit done by Hillary Clinton presented on the fun Grammy awards show while the Neoliberals implement their economic polices which neither the Democrats nor Donald Trump understand.
at January 29, 2018