Economics Matter, Stupid!
Combating the Bi-Partisan Assault on the
Enduring Economics of the Pacific States

Clinton's campaign advantageously used the then-prevailing recession in the United States as one of the campaign's means to successfully unseat George H. W. Bush. In March 1991, days after the ground invasion of Iraq, 90% of polled Americans approved of President Bush's job performance. Later the next year, Americans' opinions had turned sharply; 64% of polled Americans disapproved of Bush's job performance in August 1992.

A reason for the rapid acceptance of this admonishment is that without a solid economy people become fearful and irrational. And by "people" we mean the voting public.

International trade creates economic growth in every state, and now supports an estimated 41 million American jobs. U.S. trade-related employment grew three and a half times faster than total U.S. employment between 2004 and 2014. Global economic engagement is critical to the well-being of the people in all the United States.

But for some reason, both political parties ignored reality in 2016 because of Donald Trump's successful pitch to the Deplorables that international trade was the source of all their economic problems.

As explained in a previous post, by 1571 (50 years before the Pilgrims and the first Thanksgiving) the city of Manila became the capital of the Spanish East Indies, with trade soon beginning via the Manila-Acapulco Galleons utilizing that efficient sailing route from the Philippine Islands to Mexico which took advantage of the Kuroshio Current and the California Current.

Products such as silk, spices, porcelain, silver, and gold were shipped between the Americas and Asia with the ships sailing down the Pacific Coast along lands now known as Washington, Oregon, and California. Trade with Ming China via Manila served a major source of revenue for the Spanish Empire.

The only significant exception was a 2016 opinion piece written by Ohio Governor John Kasich on the Trans-Pacific Partnership that appeared in The Washington Post in which he explained why the TPP was critical to the security of all of these United States:


Don’t be fooled by divisive talk in the presidential campaign that the TPP is only a debate about trade. At its very core, this agreement is about making sure the United States continues to strengthen its essential alliances and is willing to sustain its standing as the global leader — something we have done for more than half a century.
Does the United States still have the ability — or the will — to be the undisputed global leader, a role it has held since World War II? It’s a question to be answered soon by members of Congress as they approve or reject an initiative to give the United States expanded access to 11 countries that represent more than a quarter of the world’s trade, while leveling the playing field for U.S. workers and businesses.
The last thing we need is for these thriving markets to come to believe they can’t count on U.S. support, pushing them instead into economic and geopolitical relationships with China or Russia. In the event of our inaction and loss of resolve, the United States will surrender global leadership to our most aggressive rivals, dictators who have the most to gain: Vladimir Putin, Russia’s latter-day Stalin; and Xi Jinping, the most repressive Communist Chinese leader since Mao Zedong.

The attack on the TPP in 2016 by both Presidential candidates, both New York citizens, and by both parties in Congress, was a rejection of the obligation to defend the Pacific States, a rejection by the people living East of the Transcontinental Divide.

That rejection is being expanded by the Trump's attitude against the North American Free Trade Agreement (NAFTA), again an attack supported by the population East of the Transcontinental Divide.

With the collusion of the Trump Administration, China's leader Xi Jinping has taken full control of the future of trade in the Pacific.

What follows are some facts about exports from the Pacific States provided by the U.S. Global Leadership Coalition. Remember, "exports" are things we sell to others. Note that only one nation among the largest markets was not a NAFTA or Pacific nation: 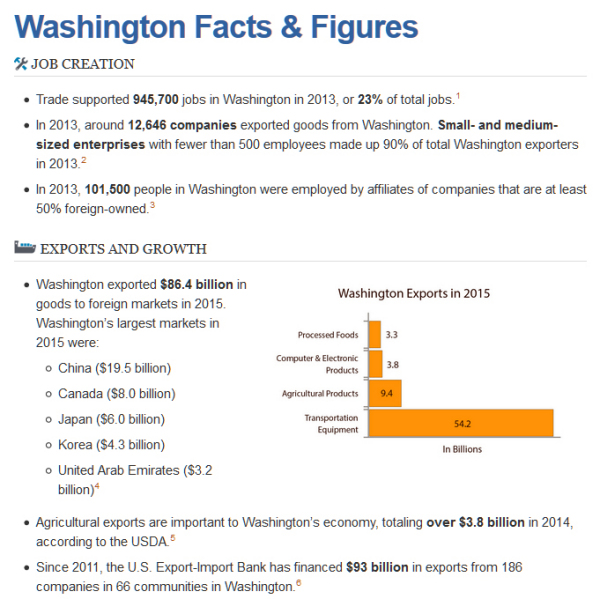 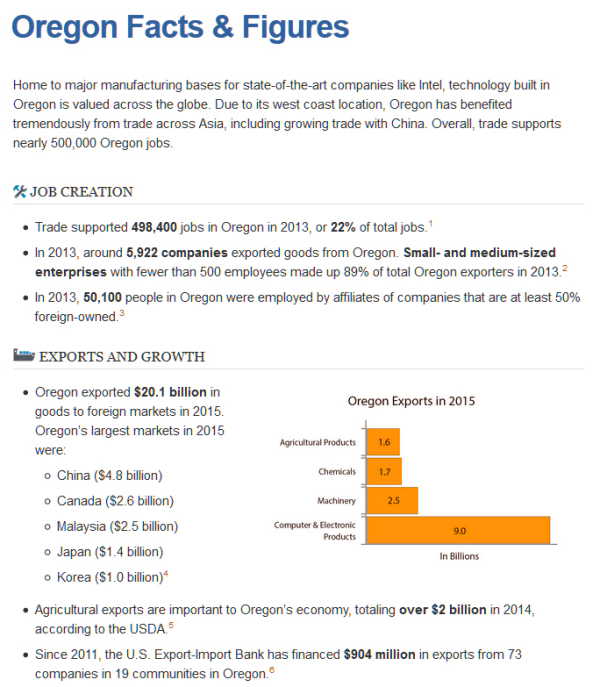 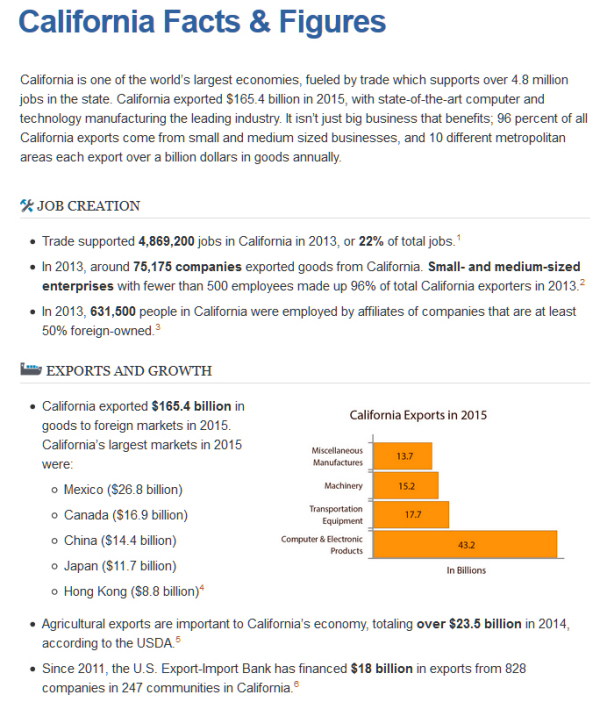 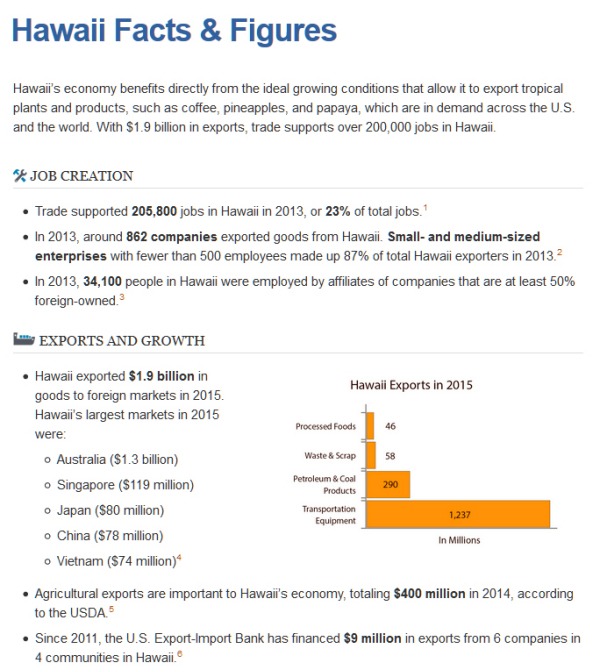 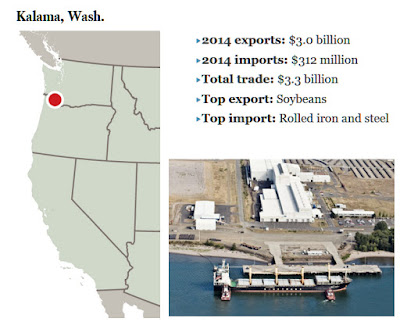 In 2015 the LA Times ran an Infographic piece West Coast ports: What comes in, what goes out and what it's worth providing look at the volume and variety of both imports and exports at the 28 ports along the West Coast totaling over $630 billion in 2014, including smaller ones like Kalama, Washington (total 2014 trade $3.0 billion, top export Soybeans, top import Rolled iron and steel).

Consider this from a newspaper in the State of Washington The Daily News  Local ports worry over Trump’s possible steel tariffs :


At Steelscape and its subsidiaries, steel imports support about 800 jobs in the U.S., including 270 jobs at the Port of Kalama. The company imports hot rolled steel coils, which are processed into cold-rolled, flat steel for building materials such as siding and roofing.
Although the company gets a small amount of steel from domestic sources, imports are the bedrock of its business model. Steelscape says it can save about $60 to $100 per a ton of steel by importing it through the Columbia River docks rather than shipping it in over the Rocky Mountains.

The Rocky Mountains are, of course, the Transcontinental Divide discussed previously, the geographical barrier that prior to the 19th Century would have resulted in a different country on the west side.

No one in Ohio or Alabama or New York should be blithely discussing trade policy for the Pacific Coast. Trade along this Coast has been going on since 300 years before there was an Ohio or Alabama and its complicated. And the fact that the two 2016 Presidential candidates - both of whom were born, raised, educated, and currently live East of the Continental Divide - focused not on trade policy with Europe but instead trade policy with the Pacific Rim countries is preposterous.