Welcome to the Pacific Progressive Message

The core Progressive Pacific Message is that individual freedom is bound to one's personal responsibility to assure equitable communities. The ongoing mission is:


As knowledge and technology evolve in the 21st Century, the day-to-day customs and practices of individuals, their organizations, and their governments should be adjusted to assure the creation and maintenance of equitable communities which permit every person the opportunity to pursue personal productive goals while sharing with all other humans equality in personal dignity and human rights while enjoying freedom with responsibility. 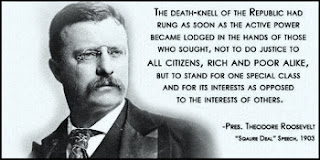 "Progressive" in the 21st Century does not mean any "liberal" or "socialist" or "leftist" or "rightist" or "populist" ideology. It means addressing, through individual action and public policy, significant inequities resulting from prejudice, industrialization, urbanization, and corruption much as it did beginning in the late 19th Century and early 20th Centuries. Solutions to the problems were, and are, to be addressed in a balanced, pragmatic approach not dependent upon ideology. 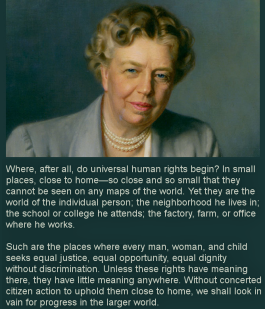 Perhaps no mid-20th Century Progressive worked harder to achieve the ideal of securing human rights than "The First Lady of the World" Eleanor Roosevelt.

After the end of WWII she led the international process that resulted in the adoption of The Universal Declaration of Human Rights in December 1948. At the time of her death on November 7, 1962, she was the first Chair of the Presidential Commission on the Status of Women.

It is time for Progressives to pick up her sword-of-persuasion to defend Progressive policies in the Progressive Pacific States of Hawaii, Washington, Oregon, and California.

Also, it is time for Progressives to pick up her sword-of-persuasion to restore Progressive polices within all the states of these United States.

Beginning in the U.S. in 1947, a political movement that in 2016 most Americans had never heard of - the Neoliberal movement - sustained by billionaires such as the Koch Brothers, began the task of displacing the Progressive message established by Republican President Teddy Roosevelt. Neoliberals have successfully ended “trust-busting,” the breaking up of large corporations that had controlled prices and prevented competition.

They succeeded in displacing the Progressive message advocated by Democratic Presidents Franklin Roosevelt, Lyndon Johnson, and Jimmy Carter by eliminating or reducing the impact of fair trade and pro-worker laws and by minimizing the economic safety-net programs.

As the result, they restored late-19th Century income inequality in the United States. After their  beginnings in 1947 it took American Neoliberals 70 years to solidify the map below, though as we explain elsewhere it was a surprisingly short 33 years after 1947 when we elected an avowed admirer of Neoliberalism to the Presidency in 1980. 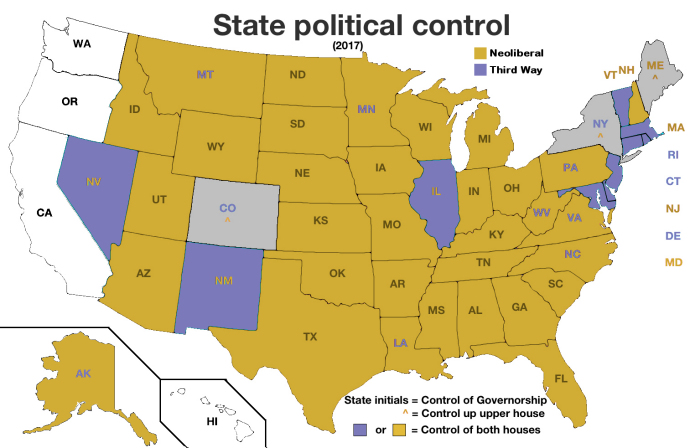 Progressives now must be willing to commit to a similar effort. That won't be easy. As you might note, the map above does not use the terms "Republican" and "Democrat" but rather "Neoliberal" and "Third Way." The reason for this is simple. While American Neoliberals such as the Koch brothers have been able to gain an ideological dominance in the Republican party, they have also established an ideological beachhead in the Democratic Party.

In 1992 Democrat Bill Clinton was elected President ushering in the era of Third Way Democrats and ushering out of the Democratic Party power structure true Progressives. As explained in Wikipedia:


In politics, the Third Way is a position akin to centrism that tries to reconcile right-wing and left-wing politics by advocating a varying synthesis of right-wing economics and left-wing social policies. The Third Way was created as a serious re-evaluation of political policies within various centre-left progressive movements in response to international doubt regarding the economic viability of the state; economic interventionist policies that had previously been popularized by Keynesianism and contrasted with the corresponding rise of popularity for economic liberalism and the New Right.
..."Third Way" presidents "undermine the opposition by borrowing policies from it in an effort to seize the middle and with it to achieve political dominance."
...The Third Way think tank and the Democratic Leadership Council are adherents of Third Way politics.

This was partly the result of the realization by some Democratic intellectuals that their party was losing ground because the core message of Progressivism is that "individual freedom is bound to one's personal responsibility to assure equitable communities." And if Bill Clinton is anything, he is an intellectual deliberately shrouded by using his childhood poverty.

Which brings us to the ironic problem of the successful attack on "intellectuals" being expanded by American Neoliberals who, focused on their narrow goal of unleashing unfettered capitalism, set out to create a distrust of science and particularly to discredit the climate science advocated by Al Gore. 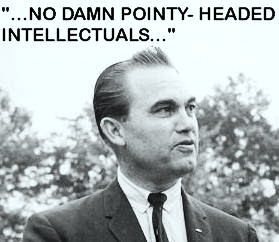 The late George Wallace, Alabama Governor and 1968 Presidential candidate pictured at the left,  gained notoriety for tapping into an anti-intellectual bias that many politicians have used (though the quote shown is somewhat inaccurate as he said: "Pointy-head college professors who can't even park a bicycle straight ....").

That anti-intellectual bias, particularly when coupled with racial prejudice and/or class distrust,  makes it is difficult to explain to far too many Americans the complex history that created the 21st Century United States. It is that history which resulted in a significant cultural divide between the Pacific States and the 33 Neoliberal controlled states shown on the map above.

The crisis is that the American "anti-intellectual class" bias based on perceived snobbery has been used by politicians representing corporate interests to create an "anti-science" bias. Unfortunately, the problem lies in the definition of "science."

As explained by Wikipedia (emphasis added):

With this understanding, we can then see the potential problem of the "intellectual." Per Wikipedia (emphasis added):


An intellectual is a person who engages in critical thinking, research, and reflection about society and proposes solutions for its normative problems.

As further explained by Wikipedia:


Normative generally means relating to an evaluative standard. Normativity is the phenomenon in human societies of designating some actions or outcomes as good or desirable or permissible and others as bad or undesirable or impermissible.

In other words, an "intellectual" is a person who ponders under the guise of engaging in the social sciences, matters related to politics, economics, religion, and philosophy, and then offers opinions supported by logic based upon observation of groups of people using preconceived values, opinions frequently offensive to many regarding human beliefs, human behavior, government, and law.

This has allowed goal-oriented Neoliberals to deliberately create a political atmosphere that confuses "intellectuals" with "scientists" in natural science fields. Those scientists use "scientific method" as described by the Oxford Dictionaries Online as (emphasis added):


...A method or procedure that has characterized natural science since the 17th century, consisting in systematic observation, measurement, and experiment, and the formulation, testing, and modification of hypotheses.

Unlike the social sciences, before a hypothesis in natural science can become published as fact, experimental and theoretical results must be reproduced by many others within the scientific community - an arduous process referred to as "peer review".

Social "science" has not retained that approach. Statistical studies are the core of the social sciences when the "social scientist" attempts to prove a hypothesis. But instead of the arduous process of peer review prior to publication, the conclusions of literally thousands of social science statistical studies appear in the popular press as support for some assumed arguable truth. This has allowed intellectuals to insult the beliefs of thousands of voters. Thus, it becomes clear to many Americans that all scientists are in the businesses of offending people, a truth then used to undermine natural science when it serves a political purpose.

In truth, both Neoliberalism and Progressivism are the result of the pondering of intellectuals, using data from the social sciences - sociology, economics, political science - to support normative views. The weakness of Progressivism is that historically Progressives have been more transparent in their activities, more thinly spread while advocating for numerous disparate goals, and more focused than Neoliberals on national politics rather than on state and local government.

Neoliberals retain a late 18th Century view of these United States - that the states are empowered to govern and they allocated only very limited powers to the new national government. In fact, this is a correct take on the Constitution as it was viewed not by "the Founding Fathers" but by the vast majority of state politicians who voted to ratify it, and by their constituents.

In these blog posts (and the Progressive Pacific Message web pages) we offer some insight into the Neoliberals who, despite the fact that they are well-educated (many economic philosophers), have abandoned all conscience piggy-backing on the appeal of that anti-intellectual bias, plus racial bigotry, religious dogmatism, and class prejudice, in order to create that map above, solely to achieve their narrow goal of unleashing unfettered capitalism.

In our website a narrative on American Neoliberal activity is offered in order to help Progressives organize for winning elections over the next 30 years. But Progressives need to create their own future narrative for the 21st Century.

Whether to interface with the existing political parties or bypass them will be one of the first decisions.

You are encouraged to go to our website. The information contained in those web pages and this blog are not a "short read." It is, however, far from a comprehensive history/geography textbook. It simply offers some insight into the 21st Century amplification of a deep American cultural split - useful if you want to do something about what has happened to the Progressive movement of the late-19th-to-mid-20th Centuries.